Since the 1990s, the artist, inspired by several visits to Mexico and Peru, has been studying non-European indigenous cultures, which influenced her graphic work and animated her to create small terracotta heads – an ongoing project since the year 2000.

Her fascination with the sea, with beaches and tides, captured in photographs and graphics, led Margret Kohler-Heilingsetzer to the coasts of Spain, Mexico, Australia and, above all, Italy, where she was exposed to the fate of ‘boat people’, migration and asylum policy.

Margret Kohler-Heilingsetzer studied graphic/printmaking art at the Academy of Fine Arts in Vienna and specialized in etching. In the 1990s she used increasingly analogue black&white photography, photoalugraphies and explored experimental printing. Since 2006, the artist has been using digital photography as a basis for prints on offset plates, performing exposure and printing herself. This process is important for Margret Kohler-Heilingsetzer, as it often leads her to new ideas.

Margret Kohler-Heilingsetzer recent prints develop from black&white photographs of her terra-cotta heads, photographs of the beach, ebbs, footprints and sand drawings, as well as from print media and internet. She transforms such images, fragmented or altered, into offset symmetry prints since 2009, parallel to her work with terracotta heads. 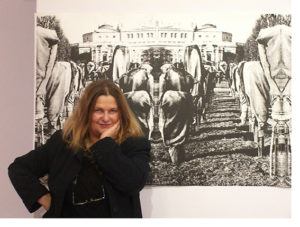